We're thrilled to have author and Chicago Review Press editor Jerome Pohlen guest-posting in celebration of his recently released—and very timely—book, THE APOLLO MISSIONS FOR KIDS: The People and Engineering Behind the Race to the Moon with 21 Activities. Enjoy! 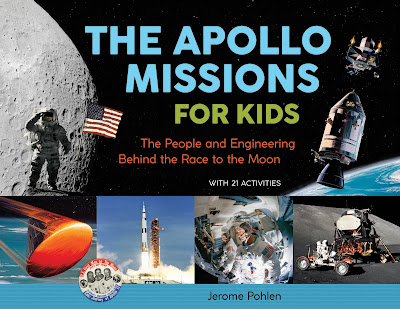 Next week (July 20) marks the 50th anniversary of the first human landing on the moon. I chose to write about Apollo—not just Apollo 11, but every mission—because my father and three of my uncles worked on the program. I understood the basics of the story before I started, but writing the book have me a fresh appreciation for this remarkable engineering achievement, and the brave and bold people who made it a reality.

One of my favorite activities from the book asks readers to calculate the relative distance between the Earth and moon using a simple model. It starts with a given: If the Earth was the size of a basketball, the moon would be about the size of a tennis ball in comparison. But how far apart would the two be on this same scale? As it turns out, the distance to the moon is roughly 10 trips around the Earth’s equator—not very far, right? Readers measure the basketball’s “equator” and multiply by 10—it’s 25 feet! And to get a sense of that distance, readers are asked to hold these two balls that far apart.