The Essential Art of Asking Questions! 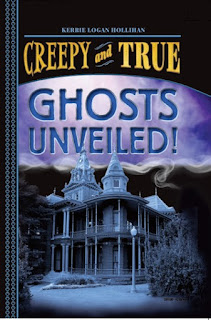 As those who know me know, I like to randomly “chat people up.”  In fact, doing so is a proven technique of journalists who often like to get interviews going by asking easy questions before they move onto serious ones. Which what I did when I talked my family, friends, and others doing research for my new book Unveiled!

For my ghostly research,, I acted like an historian. I went to historical societies and online sites for academic research. For others I relied on my wonderful Cincinnati Public Library for old books, newspapers, and magazine articles. Blog posts are also an ok start, though I pay careful  attention because often they make errors of fact.

What I tell kids is this:

You can think of an historian as a detective doing an investigation. He or she asks a ton of questions:

And then later on … how?

And even later…. what if?

So, how does a writer of history go about investigating?  That answer would be:

Research!  In the course of writing this book, I did a boatload of exploring.

I made a virtual dig into the graves of all the people you will read about, and I ended up learning new things about old stuff I’d studied in school

But the best fun was asking people around me: “Do you believe in ghosts?” In the  introduction, I wrote about the Q&A I had with two sixth grade girls. Their answers spanned the realm of possibilities: “No,” “Maybe,” and “We know someone who…..” The same with my former neighbor—and what a surprise she gave me!*

*For that, you will have to read the Afterword in the book…..:)

The point is: Encourage kids to act like reporters and ASK QUESTIONS of the folks around them! If they don’t –or if you don’t–you will never hear the answers. Think what you might be missing.

To get kids started in the art of the interview, supply a pen or pencil and a steno notebook. Have them round up a few facts about their topic and then to rough out some questions that rise from those facts. They’ll be on their way quickly.