by Brandon Marie Miller
Cave walls. Clay tablets. Stone. Bone. Papyrus. Vellum (animal skin). For thousands of years people etched drawings and painted writings onto these materials. Then, about 2,000 years ago, a Chinese court official named Ts'ai made the first paper. The process mashed tree bark, hemp, shredded rags, and water into a pulp. The liquid was pressed out, and what was left behind dried into a thick, strong, rich paper that stood up to ink and paint!
Over the centuries, paper allowed the spread of information and art around the globe. Paper-making mills and printing presses churned out books, newspapers, and advertisement broadsides (posters). Official documents, recorded on paper and housed in archives, allow us to study the past. Paper made it possible to print thousands of copies of novels, plays, and poetry that anyone could read. People penned letters, journals, and diaries offering us a glimpse into lives and thoughts from centuries ago. Scientists scribbled down notes and proposed theories, sharing their new knowledge through published books and pamphlets.
When I wrote my book Benjamin Franklin, American Genius, I noted Franklin's lifelong use of the power of the printed word. As a young apprentice he learned the trade of printing newspapers and secretly started writing his own articles under a pen name, Silence Dogood. He'd go on to make his fortune printing his own newspaper and almanac. In the 1700s paper was mostly made out of recycled cotton and linen rags and clothes. Always on the lookout for a good business enterprise, Franklin opened a stationary shop alongside his printing business and collected rags for making paper-- eventually he owned many paper mills.
Today, paper mills use less expensive wood fiber mixed with recycled paper instead of cloth fibers to make paper pulp. Recycling has always been part of paper making and you can do your part to keep that going by recycling paper at home and at school. Whenever you use a paper bag, cardboard box, notebook paper, envelope, or read a book or magazine-- you are part of the ancient story of paper! Try your hand at making your own paper art! 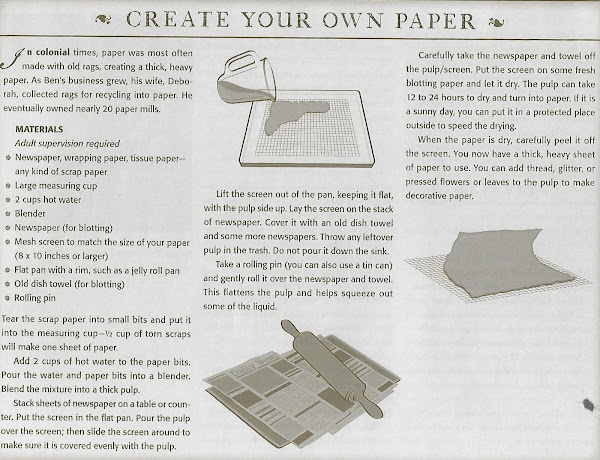